Although they have been talking for a long time, he cannot make her believe him.

A. since B. although C. until D. before

Even if it rains tomorrow, we won’t change our plan. 即使明天下雨，我们也决不改变计划。

Even if I failed again, I will not give up the experiment. 即使我再次失败，我也决不会放弃实验。

Even though I didn’t understand a word, I kept smiling. 即使我一个字也不懂，我还是保持微笑。

Even though you say so, I do not believe it. 即使你这样说，我也不信。

Much as I admire his courage, I don’t think he acted wisely. 我虽然佩服他的勇气，但我认为他这样做是不聪明的。

Strong as you maybe, you cannot lift it. 虽然你可能很有力气，你却无法把它提起来。

Child as he is, he is very brave.尽管他还是个孩子，但是他很勇敢。

While I understand your point of view, I do not share it. 我虽了解你的观点，但不敢苟同。

While I sympathize, I really can’t do very much to help. 虽然我很同情，但我确实帮不了什么忙。

A.Since B. After C. While D. Unless

We are determined to fulfill the task, whatever/no matter what happens. 不管发生什么，我们决心完成这项任务。

Whichever/No matter which you buy, there is a six-month guarantee. 不论你买哪个，都有六个月的保修期。

Whichever/No matter which of the two men had stolen her purse, Barbara was determined to find them. 不管是这两个人中的谁偷了她的钱包，芭芭拉都决心找到他们。

You can’t come in, whoever you are. 不管你是谁，都不能进来。

Whoever/No matter who wants to speak to me on the phone, tell him I’m busy. 不管谁要我接电话，就说我现在正忙着呢。

Wherever/No matter where you go, I’m right here waiting for you. 无论你到哪里，我都依然在这里等着你。

However much you regret doing that, there is nothing you can do about it now. 无论你可能多么懊悔你曾经做过的事，现在也无济于事了。

However high it may be, it can’t reach the sky. 它不论有多高，也高不到天上去。

Whenever I’m unhappy, he cheers me up. 不管什么时候我不高兴，他都给我鼓劲儿。

A. However the story is amusing

B. No matter amusing the story is

C. However amusing the story is

D. No matter how the story is amusing

A. however B. no matter

C. although D. whatever

You’ll have to attend the ceremony whether you’re free or busy. 不管你忙不忙，都要参加这个典礼。

Whether you believe it or not, it’s true.无论你是否相信，这都是真的。

A. whenever   B. whether

C. whatever D. no matter

1.（2017·北京卷）Their research also suggests how we may build lasting memories over time _________the synapses become thinner.

2.（2017·江苏卷）_________clean energy is increasingly used in our daily life, global warming will continue for some decades after CO2emissions（排放）peak.

3.While high school does not generally encourage students to explore new aspects of life, college sets the stage for that exploration.

4.(2017·新课标卷II)The friendship that grew out of the experience of making that film and The Sting four years later had its root in the fact that ________  there was an age difference, we both came from a tradition of theater and live TV.

5.(2017·新课标卷II)Though the movie is 30 years old, most of the 250 seats were filled with teary-eyed audience wanting to say good-bye to the old building.

1._________ the students found the soldier’s idea interesting, the system for the blind was too difficult to be of practical use.

2.Today, both male and female athletes from around the world can take part in the Olympics, _________nation they come from.

A.no matter B. whatever C. what D.no matter where

3.The engineers are so busy that they have no time for sports activities, _________they have the interest.

A.how much may it cost B.no matter how it may cost

5.______these different forms of greeting and customs might seem strange to you, remember _____you consider normal probably seems just as unusual to others.

C.As heavily it rained D. Heavily as it rained

A.in case B. even though

9.He will never give up the chance to go abroad for further education _________the situation is.

10.Jackson is cheerful about his life _______ he is suffering from cancer.

C.as if D. ever since

A Japanese company has just invented Pepper, a human-like robot. It has arms and hands, but has no legs. Pepper can speak 17 languages and  1 (have) a display(显示器) on its chest, in which you can type in many different  2 (command). The robot’s artificial intelligence system can read different kinds of human emotions. It can also read, answer questions and react  3 the feelings of people.

Pepper gets its information from  4 series of cameras, as well as facial and voice recognition software. It  5 (connect) to the Internet where it gets information from a database. Special safety features make it almost impossible for the software  6 (crash). Pepper is a learning robot that becomes better and better in recognizing human 7 (behave).

The market demand for robots is growing and because of its  8 (rapid) aging population, Japan is one of the  9 (large) markets in the world.  10 many companies have been creating robots for various purposes, very little has been done to get robots to work on the emotional level. Pepper is the first machine that can do just that.

A.Once B. Since C. Though D. Unless 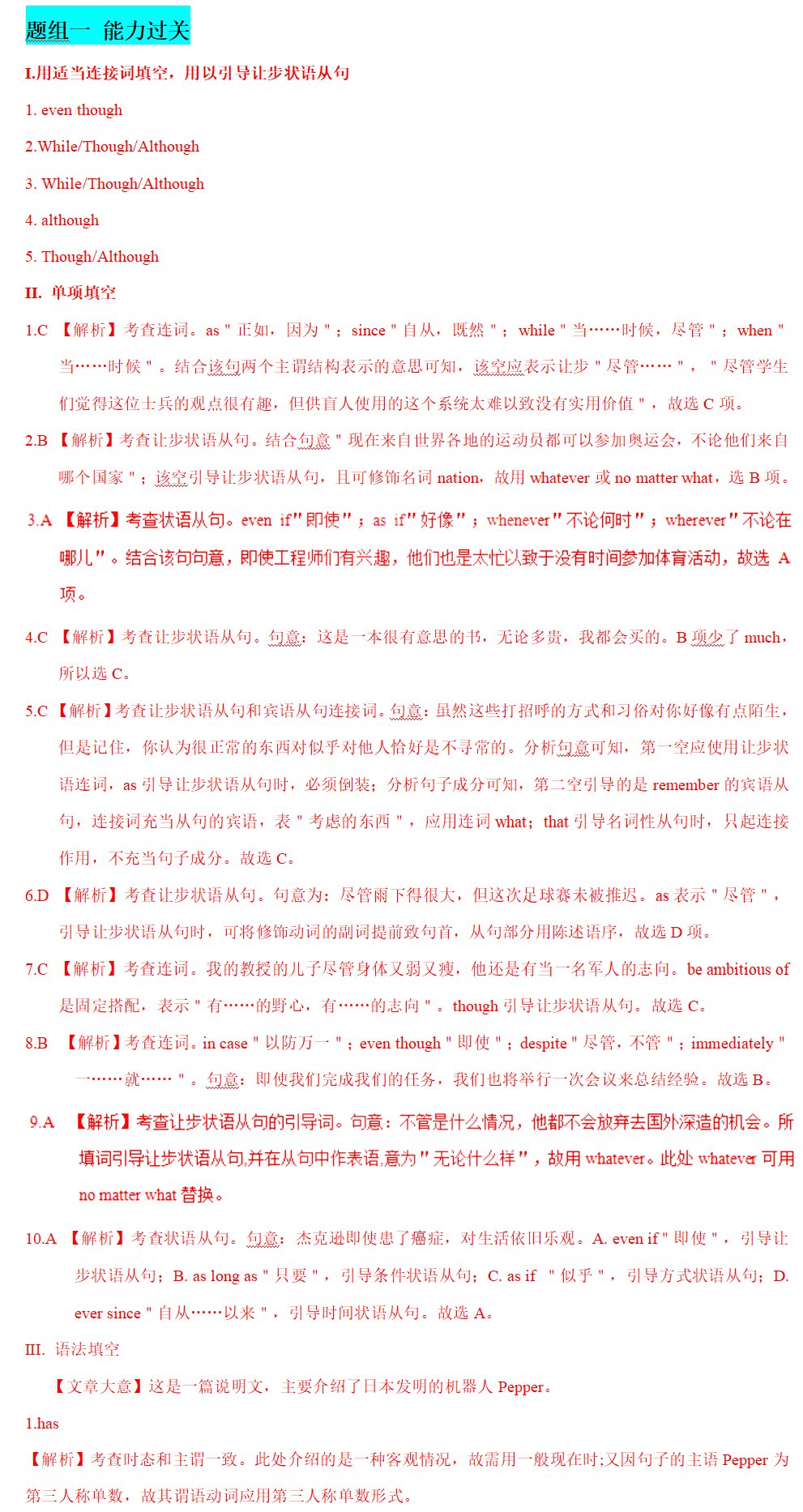 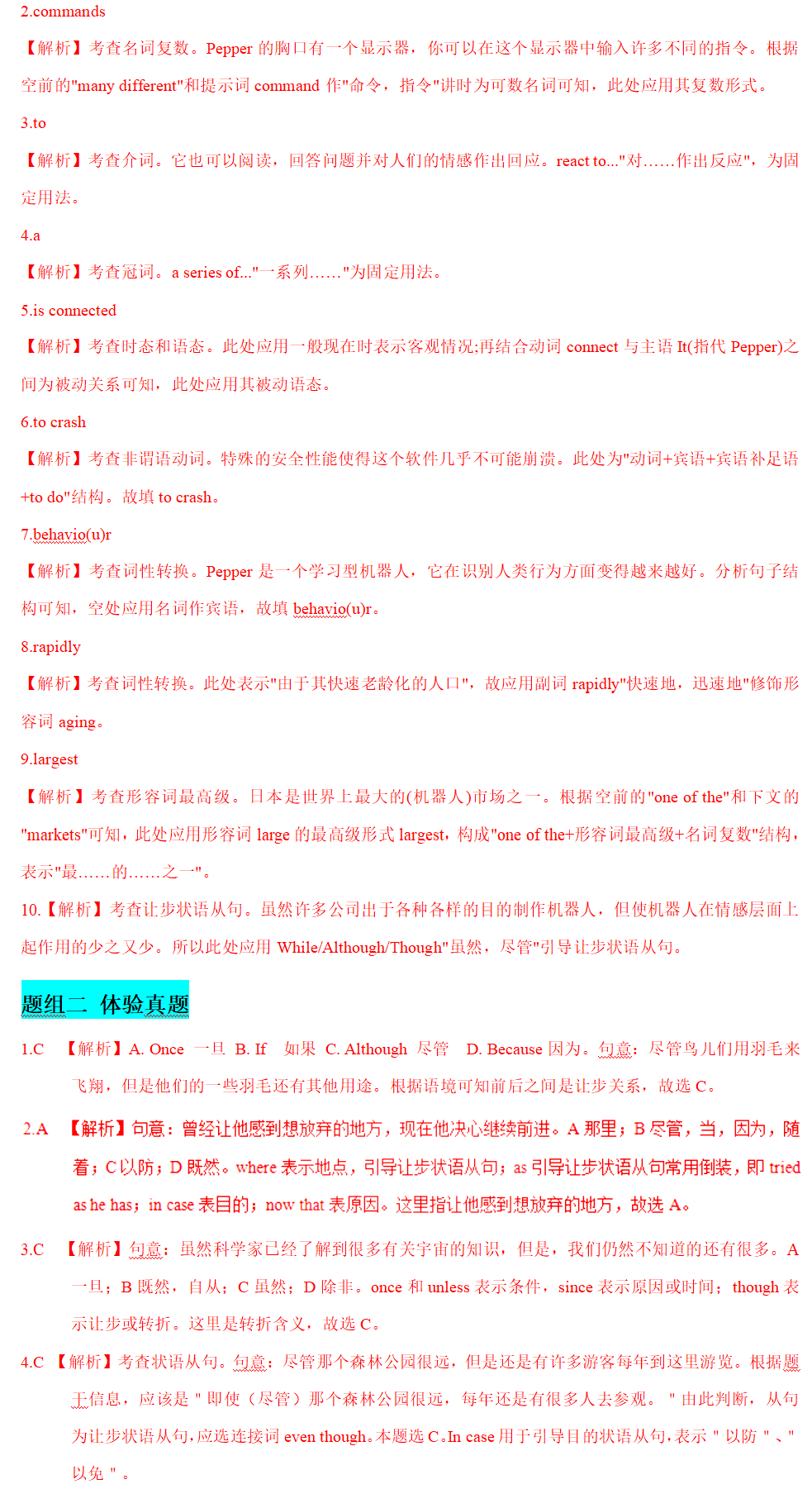