☞I still remember the day when I first came to Beijing.

☞Is this the reason (that) he explained for his rudeness at the meeting?

☞The media can often help solve problems and draw attention to situations where help is needed.

2.（2018·新课标II卷·短文改错）They also had a small pond which they raised fish.

☛Do you remember the days when we chatted with each other all night?

☛Do you remember the days that/which we spent together on the farm?

4.Experiments with domestic dogs,             one animal was given a treat and another denied, have shown that they possess a sense of fairness as they shared their treats.

A.what B.where C. that D. which

☛This is the house which/that was built by my grandfather forty years ago.

☛It’s helpful to put children in a situation where they can see themselves differently.

☛Is this the reason why (for which) he refused our help? 这是他拒绝我们帮助的理由吗？

☛I won’t listen to the reason that/which you have given us. 我坚决不听你给我们的那个理由。（定语从句中缺少宾语，所以要用which/that，而不用why）

2.I walked up to the top of the hill with my friends, we enjoyed a splendid view of the lake.

4Do you know the reason John is so angry?

8.However, this was a time one had got to have a passbook to live in Johannesburg.

1.Experiments with domestic dogs,            one animal was given a treat and another denied, have shown that they possess a sense of fairness as they shared their treats.

A.what B.where C. that D. which

3.The latest trend is the ＂A4 waist challenge＂            women take photos with a A4-sized paper placed in front of their midriffs (上腹部).

5.Miss Li found herself in an embarrassing position she didn’t know which side she should support.

7. Stephen Hawking believes that the earth is unlikely to be the only planetlife has developed gradually.

8. Great changes have taken place since then in the factory we are working.

Chengdu has dozens of new millionaires, Asia’s biggest building, and fancy new hotels. But for tourists like me, pandas are its top   1  (attract).

So it was a great honour to be invited backstage at the not-for-profit Panda Base, where ticket money helps pay for research, I   2 （allow）to get up close to these cute animals at the 600-acre centre. From tomorrow, I will be their UK ambassador. The title will be   3  (official) given to me at a ceremony in London. But my connection with pandas goes back   4  my days on a TV show in the mid-1980s,  5  I was the first Western TV reporter  6   (permit) to film a special unit caring for pandas rescued from starvation in the wild. My ambassadorial duties will include   7  (introduce) British visitors to the 120-plus pandas at Chengdu and others at a research in the misty mountains of Bifengxia.

On my recent visit, I help a lively three-month-old twin that had been rejected by   8   (it) mother. The nursery team switches him every few   9  ( day) with his sister so that while one is being bottle-fed,  10  other is with mum-she never suspects.

4.(2015·天津)The boss of the company is trying to create an easy atmosphere his employees enjoy their work. 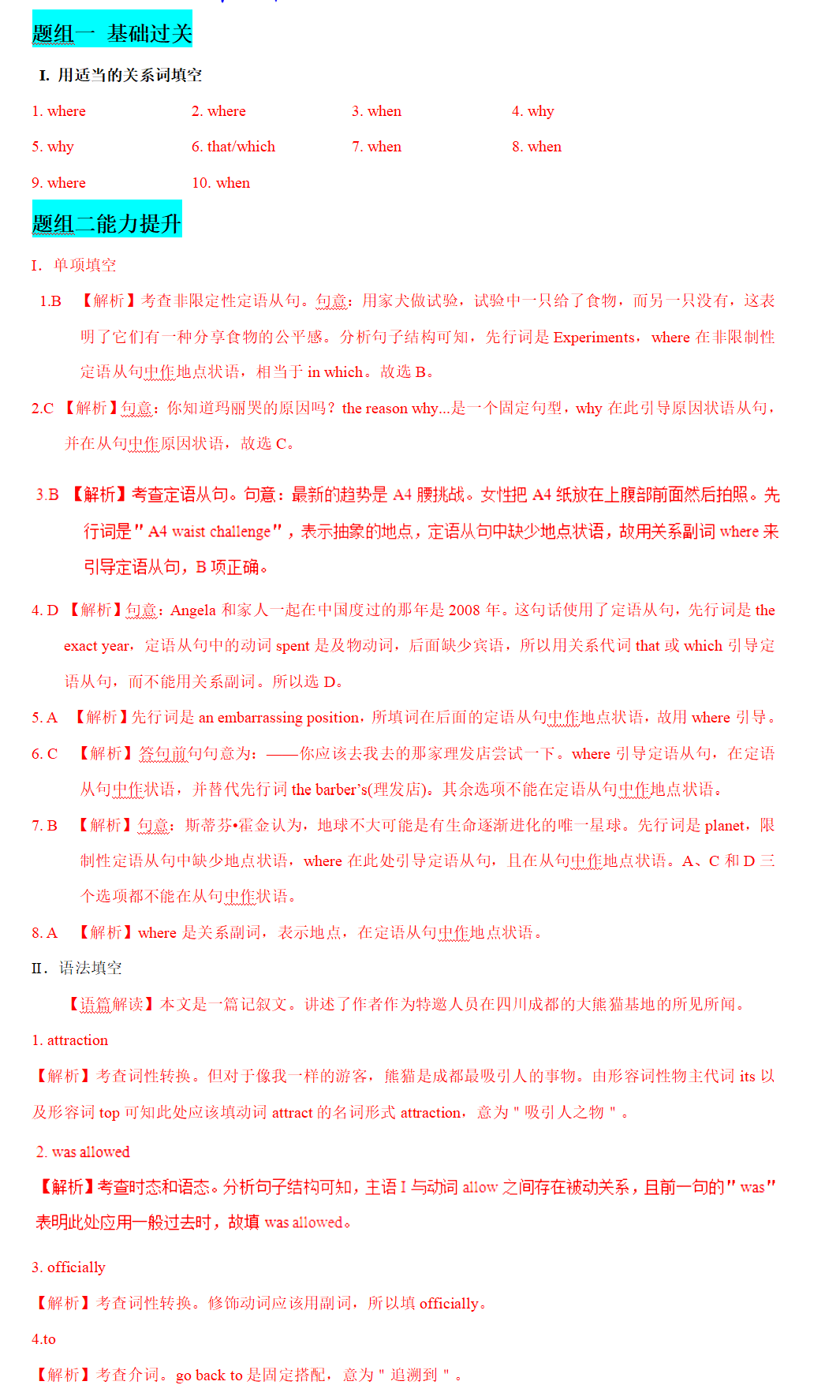 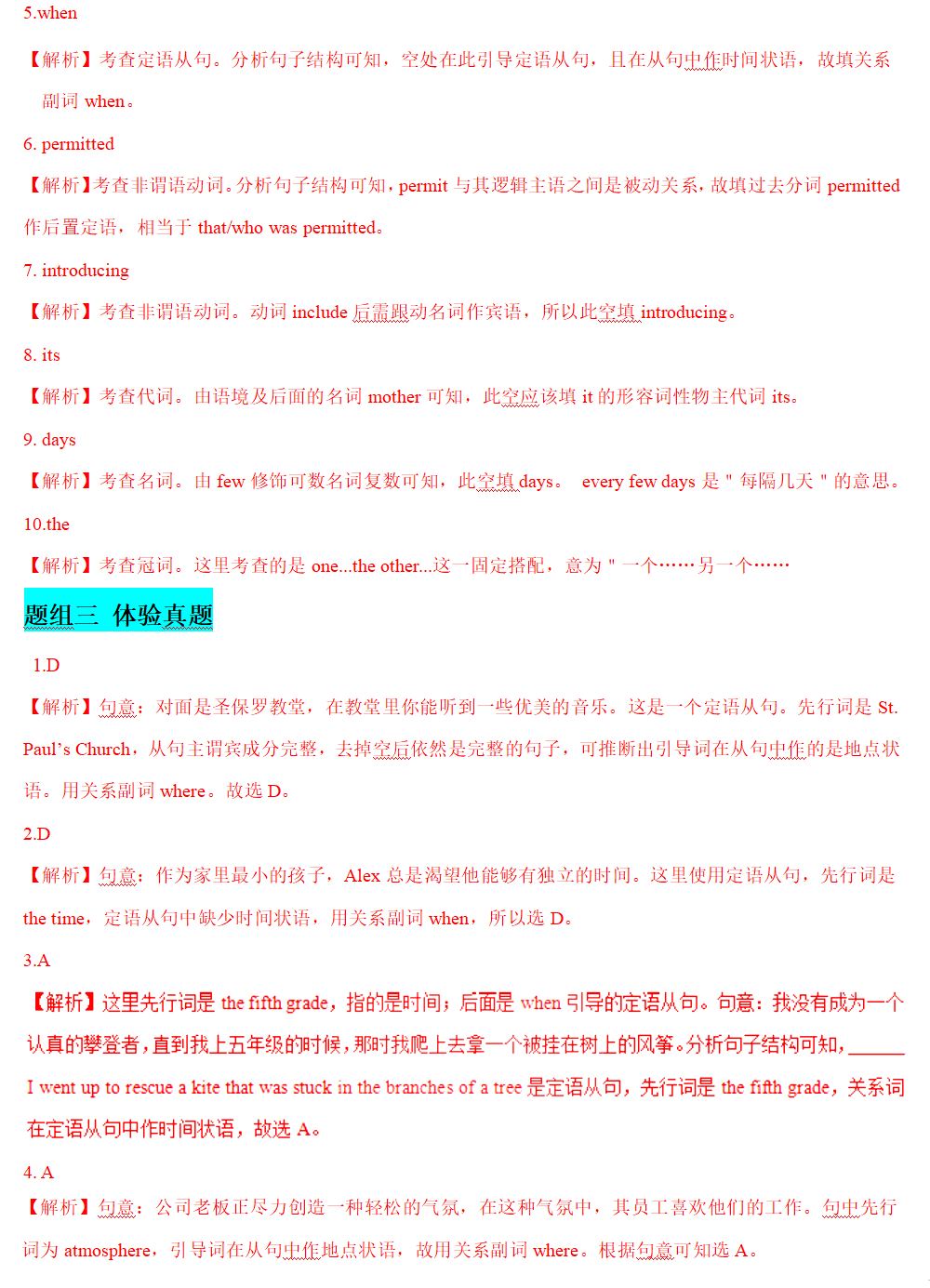